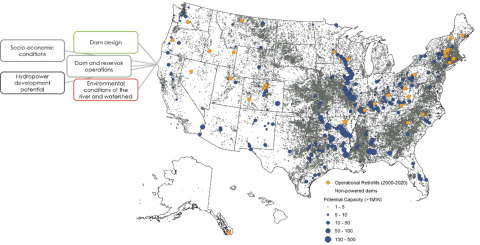 The U.S. Non-Powered Dam (NPD) Characteristics Inventory contains data from various sources, including identifiers, locations, and a wide variety of characteristics. These characteristics included describe US NPDs and their surroundings, including attributes related to the physical nature or design of a dam, environmental conditions, safety conditions, socioeconomic aspects, and hydropower development potential. Data may be continuous or discrete/categorical. Data were obtained for each dam listed as an NPD (based on USACE NID). This inventory supports the NPD Explorer and NPDamCAT web apps developed by ORNL. This dataset was developed under the Standard Modular Hydropower Technology Acceleration project, funded by the U.S. Department of Energy’s Water Power Technologies Office. The data is intended to aid in aggregating and disseminating data on characteristics of non-powered dams in the U.S.

Attributes for the various characteristic themes (operational, design [age, materials and architectural/structural, size/dimensions, water conveyance], hydropower opportunity, socioeconomic, and environmental [hydrology, climate, landscape, water quality, geology]) were obtained from a variety of sources. Each attribute is documented in the metadata file, including:

A series of basic quality checks was performed to improve use and understanding of the data. Because the U.S. Corps of Engineers’ NID (a major source of information for the dataset) is a collection of data from many state and federal agencies, problems with different reporting methods and accuracy cause issues with a small segment of the dam population. Several issues and the checks were performed to remedy or identify the potential issue as described below:

Several data-cleaning and standardization processes were applied to present the data in a form that is more convenient for classification and querying.