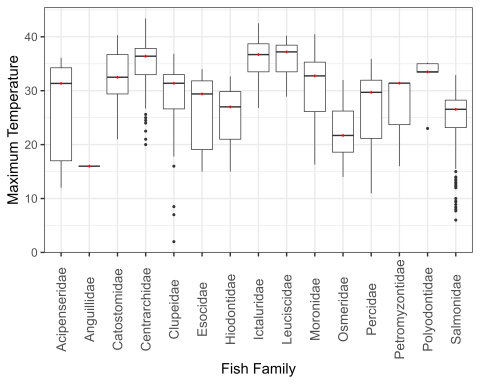 This dataset is a compilation of 13 thermal response metrics for 834 freshwater fish species across the conterminous United States (CONUS). The data were extracted from six published sources, many of which are compilations of data from other sources. The data were harmonized for comparison, and additional variables were added to summarize the metrics. From the published source, all non-fish species (i.e., those not belonging to the taxonomic classes Actinopteri and Chondrichthyes) and any fish species that was sampled outside of CONUS or do not dwell in freshwater were excluded. Species names were systematized using FishBase.org, fish life-stage classes were consolidated, and variables were renamed to make them comparable. In addition to data presented per record, a version with the thermal response metrics values averaged by species is provided. The dataset is presented as a spreadsheet containing 17 sheets. The first sheet (datasets) describes the data sources. Other sheets describe the source and compilation variables in detail. The compilation of this data was funded by the US Department of Energy (USDOE) Grid Modernization and Waterpower Technologies Offices under project ’ Water Risk to the Power Grid’. The thresholds here will be used to assess indirect climate risk to power assets mediated by species habitat.