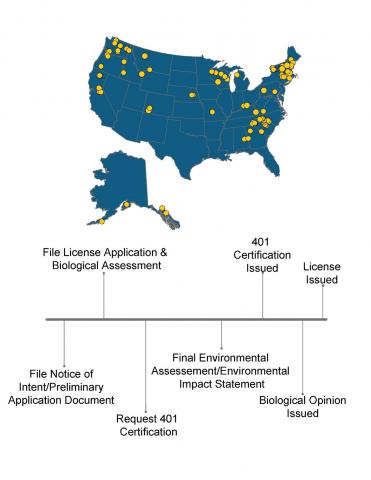 This dataset provides timeline dates, lengths, project characteristics, license characteristics, and costs of hydropower licensing and relicensing for 107 randomly selected hydropower projects that have been issued licenses since 1 October 2005 as shown in the figure above. This dataset includes information on licensing timelines including the licensing milestones shown in the bottom panel and costs recorded in the dataset are the licensee reported costs associated with licensing. Projects included in this dataset were licensed but not necessarily constructed. These data were analyzed and presented in Chapters 3 (timeline data) and 5 (cost data) of the Levine et al. (2021) report.

To understand factors that influence hydropower licensing timelines, this dataset was created by extracting information from FERC hydropower licensing documents. Steps in the licensing process and hypothesized influential factors included in analyses of this dataset were informed by the project Stakeholder Working Group. The project team examined information from 150 projects, randomly selecting 129 projects from a FERC-maintained list of the 296 projects that had licenses issued since October 1, 2005. This group represented 44% of all licensed projects in the study period, which is a large sample relative to the total number of projects licensed during the study period. Another 21 projects were from a FERC-maintained list of annual licenses, described below.

The resulting data set of 107 conventional hydropower projects (Figure 1 top panel) consisted of projects that remained from the 129 randomly selected projects after excluding projects that did not fit study criteria. The 22 excluded projects included transmission line projects, pumped storage projects, and projects with multiple types of hydropower facilities (e.g., pumped storage and conventional). This cutoff date was chosen because October 1, 2005, was the beginning date of the Integrative Licensing Process, although projects using all three license processes were included in the data set of 107 projects. The final data set included 44 original licenses and 63 relicenses.

To the extent possible, licensing milestone dates were retrieved from FERC license orders (Figure 1 bottom panel) but other documents from the FERC record were also mined for information on licensing milestone dates when information could not be found in the license order. Information on the date when National Marine Fisheries Service and US Fish and Wildlife Service received complete Endangered Species Act Section 7 Consultation packages were provided by those agencies. Some project characteristics and locations for mapping were obtained from the ORNL Existing Hydropower Assets Database (Johnson et al. 2020). In cases where there was a discrepancy between information reported in the license order and the ORNL Existing Hydropower Assets Database or another document, information from the license order was used.